In Part I we discussed how financial scams were increasing rapidly in Europe. Here’s what’s been going on in the US and Australia during the same timeframe.

The Us And Australia Report HugE Increases in Financial Scams 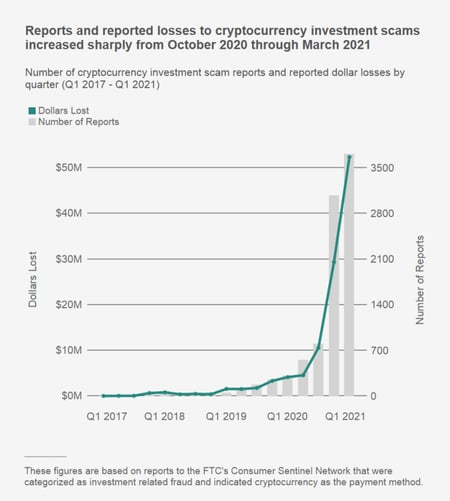 The US Federal Trade Commission reported a sharp increase of investment scams over the last year.

The US Federal Trade Commission (FTC) reported that “Since October 2020, reports have skyrocketed, with nearly 7,000 people reporting losses of more than $80 million on these scams. Their reported median loss? $1,900. Compared to the same period a year earlier, that’s about twelve times the number of reports and nearly 1,000% more in reported losses.”

On January 5, 2020, ABC News Australia reported that Australians lost more than $86 million to financial scams, more than any other form of criminal scam. On August 24, 2021,The Australian Competition & Consumer Commision (ACCC) ScamWatch reported  that  investment scams cost Australians over $70 million in the first half of the year alone, exceeding the total reported losses for all of 2020, with projected losses expected to reach $140 million by the end of 2021. Australians submitted 4,763 reports of financial scams in the first six months of 2021, which is a 53.4% increase in comparison to the first half of 2020. More than half of the reported $70 million in losses was due to Bitcoin and other Cryptocurrency scams. Bitcoin losses in the first half of 2021 were estimated at $25.7 million, up 44% from the $17.8 million total scammed in all of 2020. The ACCC Scamwatch received reports of more than $1 million lost to financial ponzi scams that started with social media ads, linking to mobile apps such as “Hope Business” and “Wonderful World” until they were finally removed from official app stores. ASIC executive director for assessment and intelligence Warren Day said that the minute that funds are transferred to a financial scam site, they are moved to another account in different country, and that cycle repeats to make it very hard for regulators and money tracking authorities such as AUSTRAC to identify where the funds have gone.

Lead-in bait to these scams includes: investment in cryptocurrency, mining of cryptocurrency, celebrity give-away scams, investment in stocks and imposter bond shares of hijacked brand name companies, ponzi schemes, online dating and romance scams, and scammers that say they represent government agencies (like the Social Security Administration, the Internal Revenue Service, etc). On December 10, 2020 the FTC issued a report that said the COVID-19 pandemic had created ideal conditions for an increase in scams including fake “training” scams for online investing and real estate with reported median individual losses of $16,000 each, and $24,000 for people in their 50s and 60s. The same report indicated that many who were drawn into financial pyramid scams were first contacted through social media such as Facebook, Instagram, LinkedIn, Pinterest, Reddit, Snapchat, TikTok, Tumblr, Twitter, or YouTube.

Cryptocurrency Is The "Perfect Storm" for Scammers:

Cryptocurrency is used as both the bait and a shield for many scammers. Scammers may start by requesting small deposit amounts on victim’s credit cards but then move lured victims to wire transfers for larger amounts. By scammers insisting on cryptocurrency for payments, the victim is left with fewer avenues of remediation.

Here’s what the FTC says about Cryptocurrency and Scams:

The combination of these factors creates an environment that is highly favorable for scammers and their unsavory practices. By paying with cryptocurrency, consumers lose the legal protections that other more traditional financial methods offer, like fraud departments at those financial institutions who can pursue complaints. Without reversibility, it is even harder to retrieve scammed funds, even when the scam is identified. And, because more of consumers' personal information is shared on the public blockchain ledger, consumers are exposed to threat actors who want to use that personal information to commit identity theft or other types of targeted fraud.

Confiant is committed to help identify and disrupt this type of financial scam by working with concerned financial Institutions as well as our existing clients in the Ad Ecosystem. Confiant’s ad security threat intelligence includes information regarding the organizations involved in scams, where it is available.  The information, if used proactively, could empower a bank or financial institution to block transfers of funds to unsavory institutions in advance of the money being stolen, disrupting the kill-chain, and protecting their customers. Customers often look to their bank or financial firm for help to rectify debt incurred in scams or recover losses due to financial scams after they occur. Confiant may be able to help as an early warning system for the bank's fraud department to prevent losses before they are completed.

Confiant created the world’s leading cyber security solution to identify, block and protect against ad driven threats. The comprehensive protection from malvertising, disruptive ads, and privacy violations inside the ad ecosystem Confiant’s proprietary ad security threat intelligence may assist bank and finance companies’ fraud prevention departments outside of the ad tech industry. This represents a deepening of Confiant’s mission as we extend the spheres where we can protect from the Malvertising threat actors at other points in the kill-chain. Confiant’s ad security solution helps the advertising ecosystem, giving publishers and ad platforms better filters over what flows through their digital pipes. If the potential fraud information is shared with the fraud prevention departments of retail banks and other financial institutions, it may help them to halt any funds transfer before these malicious scams victimize their customers. For more information contact us to receive our: “Financial Crime: Ad Driven Investment Scams” briefing.

Did you miss Part I of the series? Click here to read Ad-based Financial Investment Scams Part I.

But, wait there's more -> Read Part III where we discuss current solutions to this issue and what else we can do about these Ad-Based Financial Scams.

Are Bad Mobile Ads Contributing to User Churn in Your App?

We have all seen the recent stories on BBC, Guardian, CNN, Reuters, and other news outlets...

What is Being Done to Prevent Ad-Based Investment Scams?

In Part I and Part II we discussed how...