In 2022, according to Statista there are 6.567 billion smartphone users in the world, and the global spend for mobile ads was predicted to exceed $395 billion by eMarketer. Another study found that the majority of US mobile users spent more than 88% of their online time in apps, as opposed to browsers, creating a huge opportunity for highly effective mobile in-app advertising. Savvy publishers know that interstitial ads often have higher engagement and offer more lucrative monetization opportunities for app publishers. Highly effective at making users view the ads as the apps load, at transition points, or between levels in games, interstitials have become a very popular form of in-App ad monetization.

While interstitials are an effective ad format, these full-screen ads run the risk of disrupting UX and increasing user churn when they malfunction. Is there a way for apps to profit from interstitials while avoiding the pitfalls? Confiant’s new Autoclose Interstitial feature can accomplish both.

When They are Good, They are Very Good

When interstitials function properly, users see an indication of how many seconds they have to wait for the close button (normally an X) to appear, so they can close the ad and continue to their app content. This type of interstitial requires a choice between clicking into the ad to continue to the ad destination, closing it to return to the app, or when the close button X is hidden, missing, or malfunctions, hard-closing the app itself. In this B-R example there’s a countdown timer in the upper right corner of the ad, that is replaced with the close button after the countdown. Some interstitials close on their own after the timer completes the countdown, but most do not. That is where the newly designed feature can save the UX. 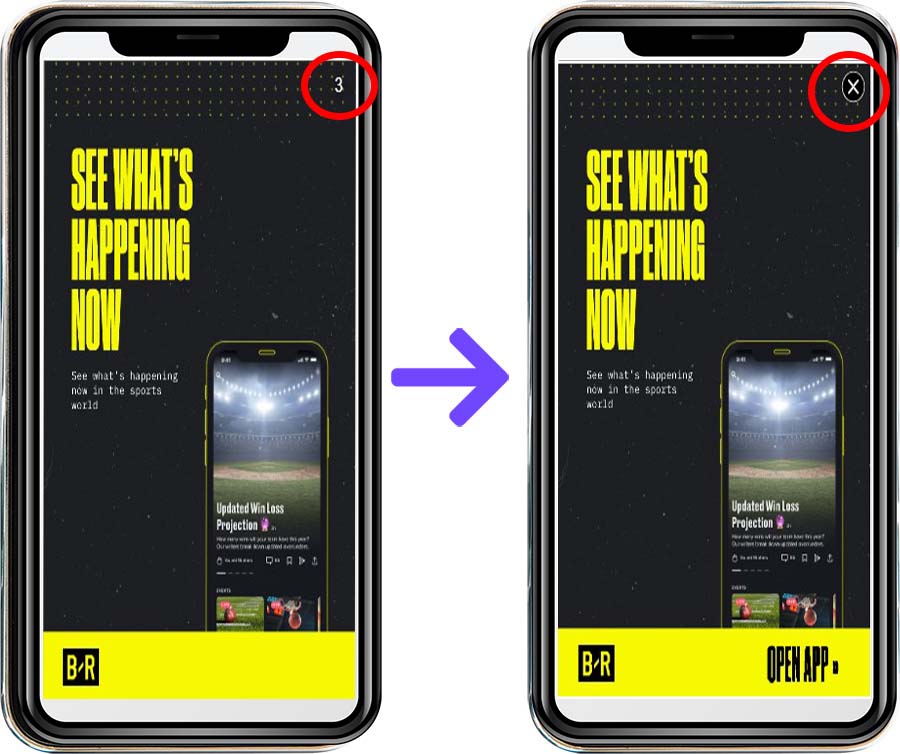 But, When They are Bad They are Horrid

When interstitials malfunction or are poorly designed, the cost to publishers can be quite high. The publisher costs go beyond losing the revenue from the ad. When users cannot locate the X button to close the interstitial ad any other way, it usually results in the user hard-closing the app itself after several seconds of frustration. Malfunctioning and misbehaving interstitials contribute to poor UX, one of the major contributing factors to user churn. This is likely to cause higher bounce rates of an app and can lead to a permanent loss through app uninstalls if not managed.

In this example, a Talbots’ interstitial ad had no visible close button on-screen, forcing the user to choose between clicking on the ad, or hard closing the app and ending the session. Both options represent a “bounce” to the app developer. Normally, an issue like this would cause user frustration that can lead to lower app usage and also contribute to increased user churn, reducing retention. However, in this case the interstitial ad was automatically closed with Confiant’s Mobile App Premier Protection (mAPP) SDK Autoclose Interstitial Feature so the user continues in the app.

According to a 2019 Upland Software study on mobile app user churn, only 27% of users are retained three months after downloading an app, meaning that almost 73% of users churned. Anything, including misbehaving or malfunctioning interstitial ads, that diminishes the users’ app experience, can contribute to churn, making it a key issue for app publishers.

Autoclose Interstitial is just one of the many configurable features that comes with Confiant’s mAPP SDK. When the close button isn’t working, is obstructed or doesn‘t appear on the screen, Autoclose Interstitials will take action based on a threshold of pre-set seconds you choose.  Rather than blocking those ads and losing the ad revenue, Confiant allows them to render and then automatically closes them after the specified number of seconds. Consider it a failsafe for when interstitials misbehave.

For example - if the feature is set to 15 seconds, once that time has passed, Confiant will close the ad on behalf of the app and the user, saving the session from ending. The action is similar to what happens when the user presses the close button. The ad is closed normally, all impression data is communicated to the ad server and the user continues using the application without further interruption. In this scenario, the app is still able to monetize with interstitials, without the risk of losing the user due to a malfunctioning ad.

Because the integration is through an SDK, it operates seamlessly whenever the app is running. App publishers can reduce their app bounce rate and user churn automatically with the Confiant mApp Autoclose Interstitial feature.

Native ads are designed to blend into content pages in order to be engaging to users, which...

Are Bad Mobile Ads Contributing to User Churn in Your App?

Confiant Pubs Got 99 Problems, but Latency Ain't one

Why The New Feature?

If you say you got latency problems, I feel bad for you son. Confiant Pubs got...